I know I'm a pedant but something that really frustrates me is hearing mispronounced words, for example "fus-trated" instead of "frustrated". Listen to what I've recorded on my phone, two sounds I hear most days on the commute to work and when I'm on my break. Can you guess where I recorded these two sounds and which phrase they have in common which is mispronounced?

Email ThisBlogThis!Share to TwitterShare to FacebookShare to Pinterest
Labels: shopping 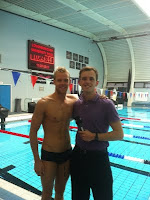 Over the last few weeks I've been working on a series for BBC Radio Derby called 'Olympic Dreams'. I'm tracking the progress of four athletes in the build up to London 2012. They are Leon Taylor who is the Paralympic football team goalkeeper from Chaddesden, Rebecca Peake, a shotputter from Kilburn, women's boxer from Oakwood Talia Anthony and one of Derbyshire's most successful current athletes, the swimmer Ross Davenport. I've been out to see them train in Derby and Loughborough. My colleague Gavin who works on the BBC Derby website, has written an article from my interview and used a snap I took of Ross at the pool at Loughborough. Click here to read it.

Working on this series, which has started on BBC Radio Derby this week, has given me a deeper interest in the sports the athletes compete in. I've really enjoyed learning about the intricacies of the athletes' training and the sacrifices they make in order to try to make it to London 2012. For example, Rebbecca (below) works as a lecturer at Loughborough College, trains before at lunchtime and after work. She trains for a week every month with her coach in Holland.

She's also a good laugh. Before researching my interviews with the athletes, I did research on them on the internet. This is one of the videos I found of Rebecca Peake, she says she was bored while on a training camp in the States!