This week I filmed with a Sheffield GP who was deeply concerned about the number of their staff having to self-isolate.
BBC Copyright
I filmed the interview with Dr Ally Hobbs from Pitsmoor Surgery in Sheffield on new camera equipment that I've just been trained on (see picture below). It's an iPhone 12 with a rig including radio mics, a top mic, a light, a tripod and a stand. I was pleased the national BBC News at Ten used my footage with Dr Hobbs in their report on the self-isolating story. 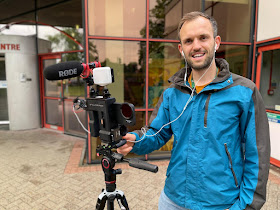