I've "no chance" of TV career 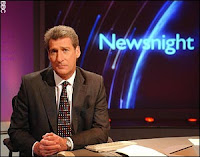 Apparently I should just give up now. My career in TV kicks off in a few weeks but it was reported today that Jeremy Paxman is far from encouraging people like me to endeavour on my chosen career path: "If any middle-class white male I come across says he wants to enter television, I say 'give up all hope'. They've no chance."

He made his remarks in a recorded interview for the annual television top-bods get-together that is the Edinburgh International Television Festival.

I was shocked to read the story earlier and pondered for a while on whether my experience tallies with his view. It didn't take long to remember that every single person in my postgrad broadcast journalism group at Cardiff University was white, half were men and all appeared distinctly middle-class. And I don't remember there being anyone from an ethnic minority in the magazine and newspaper postgrad groups either - that's 90 young journalists who have just started their career from Cardiff, what some say is the best place in Britain to prepare you for the world of journalism.

Since finishing the Cardiff course in June I have worked in four newsrooms - BBC Oxford, BBC Derby, BBC 3 Counties, and Mix 96. I can count on one hand the number of people from ethnic minorities that work in these newsrooms. Surely Paxman is off the mark, certainly in reference to whites being suppressed.

I start a traineeship at ITV News in October and hope it'll be the start of a long career in TV, radio and online. Paxo thanks but no thanks, I'm ignoring your advice.
Posted by Mark Ansell at Tuesday, August 26, 2008 No comments: For the Breakfast Show on BBC Radio Oxford we've been looking into Oxfordshire customs.

I went to Cropredy to look into a custom dating back hundreds of years. And I even had a go at bell ringing!:

Last week I found out that I had won a Channel 4 News New Talent competition - best student film.

As part of winning, the film I entered is being showcased on the Channel 4 News website. It's an absolute honour to have a film of mine on such a prestigious website. To have a look, click here.

Alternatively you can watch the film as I've uploaded it above and read more about it in an earlier blog.

The judges said: 'As well as it being a good story, we thought it was well told with a nice script and accomplished delivery. '

ThameNews.net a great source of news on the lovely market town of Thame, has a short piece on it.

I thoroughly enjoyed making the piece back in March with coursemate Dan O'Brien. In September we will be heading to Channel 4 News HQ on Gray's Inn Road in London to spend a day with the people that make arguably the best news programme in Britain. Hopefully I'll get a chance to ask a few more questions of Jon Snow. I wonder if he'll remember me? You can read my blog on the interview with Jon Snow here.