Last week I brought in my first story to the ITV Meridian newsroom.

I did all the background research to the story and set up the interviews and last Thursday it went on Meridian Tonight.

And on Wednesday I lined up the story to be on LK Today which you watch here.
Posted by Mark Ansell at Sunday, October 26, 2008 No comments:

I think I've found Ed Milliband's solution to cutting green house gases by 80%!
HOTELS!
I was in London for 5 nights recently and was shocked by the hotel's unrelenting waste of energy.
Firstly, when I arrived in my room on a mild Autumn evening, the window was wide open with the radiator below it on full blast!

Secondly, my towel and floor towel were replaced every day!

And finally, if that wasn't enough, every single day my barely touched complimentary soap was replaced with a brand spanking plastic-wrapped new one!
Posted by Mark Ansell at Saturday, October 18, 2008 No comments:

Email ThisBlogThis!Share to TwitterShare to FacebookShare to Pinterest
Labels: Environmentalism 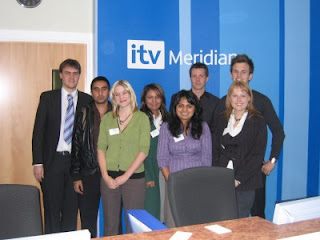 I've just started as a trainee journalist for ITV Meridian.

Today I blogged about what I've been up to so far on the Meridian blog:

My name’s Mark Ansell, I’ve just joined ITV Meridian News as a trainee journalist. I’m 23 and from Thame in Oxfordshire and have spent most of my short career working for local BBC radio stations.

This is the first time I’ve worked for ITV and because of this and the significant changes being made to regional news in ITV, I was quite nervous about starting. However, I’ve been wonderfully welcomed - the upbeat and friendly nature of the presenters in the Meridian and Thames Valley programmes is not only genuine, but reflected in all the people that work at Whiteley, where we are based.

Last week I descended on ITV’s headquarters in London, alongside the seven other trainees who will be based at the other ITV newsrooms across the country, for a crash-course in all things ITV. We learnt how top quality graphics and production are central to the success of ITV regional news, how http://www.itvlocal.com/ is being improved to build a closer relationship with our audiences and how ITV is developing the way advertising money is brought in through http://www.itv.com/.

On Thursday we visited Meridian where we had a go at presenting the news (off air!), under the watchful eye of Lisa, the gallery director (she calls the shots - literally - behind the scenes when the programmes go out) and legendary presenter Fred Dinenage. Earlier that day we went to see GMTV on the South Bank in London. While on the set I stood toe-to-toe with Thursday’s top guest, a weary looking Gordon Brown before he was interviewed by Andrew Castle.

Over the next few months I’ll be learning how to put together and deliver the ITV Meridian and Thames Valley news programmes, including planning stories for the programmes, going out to film, editing the video, and writing scripts for the presenters. My aim is to be contributing to the joint effort of putting on your regional news programme as soon as possible.
Posted by Mark Ansell at Monday, October 13, 2008 No comments: 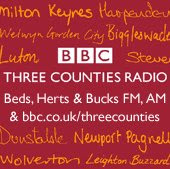 I've been doing the bulletin shift at BBC Three Counties Radio and have the pleasure of being included in a trail for the news!

CLICK HERE, THEN CLICK PLAY TO LISTEN TO THE TRAIL
Posted by Mark Ansell at Monday, October 06, 2008 No comments: