A great day of interviewing 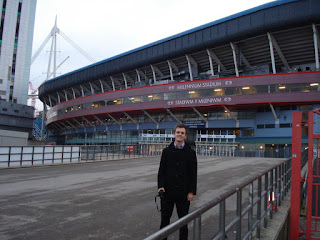 Thursday reminded me why I want to be a journalist. It was so uplifting to get out of the classroom and interview.

On Thursday afternoon I headed to the Welsh Beer and Cider Festival to interview a member of the Campaign for Real Ale (CAMRA) and a local brewer. I used the opportunity of the festival to do my ‘As Live’ assessed piece. This is where a reporter does a ‘live’ interview on location (ie away from the studio). I thoroughly enjoyed finding out why the festival is so popular and why local breweries are important. To finish the ‘As Live’, I sampled last year’s Champion Beer at the same time as asking the brewer to describe its taste and popularity. CLICK HERE to listen to the beer festival 'As Live'.

Then, thanks to a tip off from housemate and newspaper student Ben, it was a dash to the Millennium Stadium. I interviewed the Wales Rugby coach Nigel Davis next to the pitch about their upcoming match with World Champions South Africa. I felt I held my own next to the genuine journalists that surrounded the coach in the incredible national stadium.

Now I’ll edit the audio and so this week will have practised two of the key skills of interviewing and editing that we’re taught on the course.
Posted by Mark Ansell at Saturday, November 24, 2007 No comments:

Email ThisBlogThis!Share to TwitterShare to FacebookShare to Pinterest
Labels: radio

This week I finally got it. It was helped along by listening to a set of Radio 4 programmes on the British newspaper industry, some strong words from course leader Matt Yeomans in our online workshop and finally by Richard Burton in today’s lecture. What am I on about? Well it’s that whilst the easy way to deal with all the new media technology of social networks, blogs and podcasts, is to stay well away…

New technology is absolutely central to today’s, and even more, tomorrow’s world of journalism. If I do not embrace new media technology, it will affect my employability as a journalist.

According to Richard, this ‘innate ability to get hold of new technology’ is expected of any wannabe journalist, and assuming I have this, the factor that will make me stand out from the crowd is how good I am at doing the basics of journalism. That means I need to be able to find a good story, write well, have excellent spelling and grammar, be able to conduct a very good interview etc.

I need to be both a very good journalist and able to use all this new technology. So I have to keep plugging away at improving my traditional journalistic skills (especially the spelling in my case), AND I must embrace and not fall into the trap of running scared of Flickr, Youtube, my blogs etc - as I think some are on the Diploma course are.
Posted by Mark Ansell at Friday, November 16, 2007 No comments:

This is a one minute film I made with a Hannah, fellow student on my course. We wanted to make a film on a day in the life of a homeless person and were it had to be a minute and use only natural sound.

I learnt a lot in short space of time when we started researching the film. It turned out we were unable to film a homeless person so approached the Big Issue and Chris was happy to be filmed.

I was impressed with the set up and business-like nature of the Big Issue where registered sellers buy the magazines for 75p and sell them on for £1.50. It seems to work well and the Big Issue staff have an arms length relationship with the sellers are regularly coming back and forth to the office to buy more magazines catch up with the staff and other sellers.

Without wanting to come accross as patronising, I got on well with Chris and the other sellers as well as the other homeless people I met.

Darren, a homeless man I met on a homeless night support buds told me he was a heroine addict and was on the waiting list to receive methadone treatment. I learnt about his sleeping habits - he finds the warmest place possible (often a multi-storey car park) and goes to sleep as early as possible in the evening so that he can get up before he is moved on by the police or security about 6am.

I realised we did have something in common. His life was completely different to mine apart from the fact that he, like I, listen to Five Live on a pocket radio to keep up to date with all the sports news and follow the Premiership football. And yet he was painfully thin and his eyes were tired and lifeless. They're real people with real lives and interesting stories just like you or I. Hopefully it's an area I'll return to later in my journalistic career.

Posted by Mark Ansell at Thursday, November 15, 2007 No comments:

Early on in the lecture, the dramatic drop in 16-24 year olds accessing BBC News was highlighted. I therefore assume that BBC News’ upcoming developments, which Pete succinctly and vibrantly delivered in today’s lecture, are aimed at trying to reverse this trend of young people turning away from BBC News (as well as trying to keep up with society’s current and future technological use).

However this leaves me wondering, will these changes work? These quite exciting developments include a full news offer on mobiles, giant BBC screens with a live feed of News 24 in Britain’s cities and a personalised BBC News online homepage (being accessed on your mobile of course!).

My housemates believe that whether a member of ‘da yoof’ follows the news or not is dependent on their background and not related to its availability on their media devices or to do with changing the news agenda to be more youth friendly. You can conclude from this that BBC News’ developments are not going to succeed. I am unsure and hope the changes do work. The implication of 16-24 year olds continuing to be less and less engaged with the news is frightening – both for the ideal of a well educated, vibrant democracy and closer to home, for my job opportunities!
Posted by Mark Ansell at Friday, November 09, 2007 No comments: