Stuck in the Snow 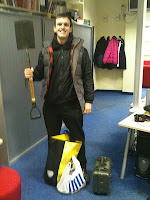 Today instead of covering the story, I became it after being stuck in the snow for four hours. I left the newsroom prepared for the cold weather (see left) and headed to Hulland Ward near Ashbourne to do a radio car story for the breakfast show. I parked the vehicle in a drive off the main road and after doing the interview decided to head to Ashbourne to report live on the effect of the snow there. What I didn't realise was that from where I'd parked - on a gradient - and despite desperate attempts by myself and the friendly people who lived there, I was going nowhere.

This did nonetheless provide me with the opportunity to report live on the my predicament. After all, I was planning to report on how the snow was impacting on people!
Snow report 1:

It also allowed me the chance to Tweet my goings on and include some snaps of what happened on the BBC Radio Derby Breakfast Show Facebook page.

After a couple of hours I was no closer to leaving but was cheered by the sight of a gritter from the council in my wing mirror. However not only did they fail to clear the snow and spread salt to allow the residents access to drive, they quickly became stuck in the snow just as I was. Their efforts to escape were captured on the phone of by Tom Coxon, a 16 year old who lives there. His video is well worth a watch, it's featured on the BBC Derby website. 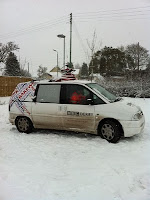 Tom provided me with cups of tea and excellent interviews for my live updates. I ended up recording a story for Wednesday's breakfast show on how he and his step dad snowbaord down the hill behind his garden whenever it snows.
Eventually, at 1 in the afternoon the RAC man managed to get the radio car out with the use of a rapidly dwindling supply of grit and a shovel I borrowed from one of the neighbours. So it was back to the newsroom having made new friends and with plenty of tales to tell my amused colleagues.
Posted by Mark Ansell at Tuesday, November 30, 2010 1 comment:

Is the high street dead? 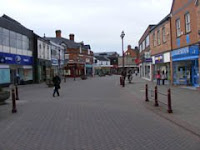 I reported live for the BBC Radio Derby breakfast show on the phone in topic, is the high street dead? I went to Long Eaton, between Derby and Nottingham, and staged managed this live. I lined up the first interview with the owner of a newsagent who partly blames charity shops for the death of the high street and then walked across the road into a charity shop to put that accusation to the shop's manager.

Reporting From A Speed Boat! 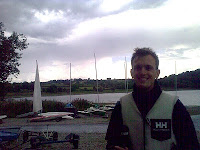 I went to Ogston Reservoir in the beautiful Derbyshire countryside to do a feature for the BBC Radio Derby afternoon show. I recorded the interview about the sailing club on a speed boat with one of the club's founder members, 91 year old Harry Fisher.