Last night I went to Farnham in Surrey to cover a meeting called by the local MP to explain his expenses. Jeremy Hunt, the Shadow Culture Secretary, is thought to be the most senior MP to come clean about all his expenses.

I put together an 'as live' for the ITV Meridian late news but as it was such a short bulletin, we used a soundbite from the MP instead. Nonetheless, it was good experience. Here's the presenter's link into the 'as live':

"A Surrey MP has tonight answered questions about expenses at a meeting attended by four hundred of his constituents. Jeremy Hunt, the MP for South West Surrey has been criticised for claiming £37,000 over three years for a second home in Farnham rather than commuting to Westminster. Cameras weren't allowed into the meeting at the Maltings in Farnham but our reporter Mark Ansell was there."

I've recently put together a showreel of some of my best bits on TV.

The day before, I went to Reading's training session to interview Coppell for ITV Meridian about the match. As you'll see, there was no sign he was on the verge of leaving. 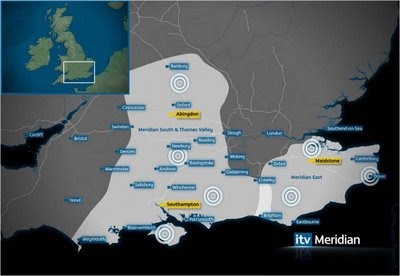 Over the last few months at ITV Meridian, I've been producing the lunchtime news bulletin. I thought I'd write a little bit about what it involves:

As well as the flagship Meridian Tonight, we have bulletins during GMTV, at lunchtime, after the News at Ten and at weekends. Each bulletin has a producer in charge and I've been learning how to produce the lunchtime bulletin. The day starts with the news meeting at about 9:15am where Adam, the news editor, goes through the stories we are considering covering in Meridian Tonight at 6pm that day. The reporters, producers and other journalists all chip in with story ideas.

As I’m on the lunchtime bulletin shift, my main concern is that bulletin. Unlike Meridian Tonight, the lunchtime bulletin is pan regional so it’s a large patch to cover - I'm keen to get stories from as many of the eleven County Council areas as possible (which if you’re wondering is Berkshire, Dorset, Essex, Hampshire, Isle of Wight, Kent, Oxfordshire, Surrey, East Sussex, West Sussex and Wiltshire).

The lunchtime bulletin lasts only six and a half minutes and includes a minute of weather, so I have to decide which of the many stories discussed in the morning meeting I can cover. Once I’ve chosen the stories, I then have to decide how they should be ‘treated’ (how we are going to tell the stories). Stories need to be treated in different ways; some for example deserve 'a live' at the scene but I have to find out if we have a reporter and satellite truck that can get to the story. Other stories will suit a report or ‘package’ and less significant stories will deserve just a few sentences, read by the presenter over relevant pictures. I put the script of the stories in the running order and cut their pictures. It’s important to have some spare stories in case we are running under time during the bulletin. The running order is constantly changing as I write up and cut pictures of any breaking stories worthy of going in the bulletin. We get told of breaking news stories from a variety of sources, including through our viewers, the emergency services and our staff.