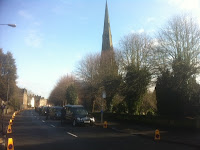 I spent today in Ashbourne covering the funeral of the four children who died in a house fire in Hulland Ward last month. I, and the other journalists from BBC East Midlands Today, ITV Central and local newspapers, were allowed to sit at the back of the church during the service. It was an emotionally draining day and I couldn't help feeling out of place - being exposed to so many people's grief inside the church. My colleague Dave has put together an excellent photo gallery of the day.
And here's one of my four live reports on the funeral...

Podcast Powered By Podbean
This breakfast show trail shows the range of stories I get to cover everyday...

Over New Year I was one of the 30,000 young people that met in Rotterdam for the Taizé European meeting. The Taizé Community is an ecumenical Christian monastic order based in Burgundy in France. It welcomes hundreds of thousands of young people for pilgrimages every year. I've been there many times and did a week in silence there in September 2008.


Every New Year, the community hosts a meeting in a different European city. There is a prayer service three times a day, workshops and the opportunity to meet other young people from around the world. It was an amazing experience especially on New Year's Eve when I was a part of a group of about 100 young people who sang, danced and chatted our way into 2011, booze-free.


Here are my photos taken on my iPhone...

The slideshow includes:
This video gives you a glimpse of what it was like during one of the prayer services that took place three times a day...

And undoubtedly one of the most important aspects of Taizé, silence...

The songs are meditative and repetitive and put you in the mood for prayer. This is a new song and one that I really love...

If you're interested in reading more about Taizé I'd recommend reading the Letter From Chile.
Posted by Mark Ansell at Wednesday, February 09, 2011 3 comments: