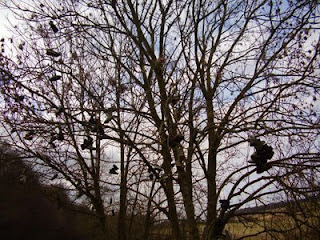 I find potential news stories in the strangest of places. On a walk in the Chilterns on my day off, I came across a tree which people living in the area attach shoes to! Having trawled the internet for more information on the shoe tree, I found out that nobody seems to know why it started and why it continues. A four-year heritage lottery project, costing over £250,00 bore no fruit. Some say the shoe dangling ritual, which began in the 1970s, has pagan origins and has just continued over the years. Others believe the shoes were originally thrown up as a witchcraft ritual to put an evil spell on unfortunate souls. But nobody knows. It’s a mystery.

Unfortunately for me, the tree is by the A40 between Stockenchurch and Studley Green and that’s not in the Meridian broadcast patch so it can't make a story for us. I had envisaged it as the ‘and finally’ story on Meridian Tonight. Still, it's a good example of why as a journalist I should always have my eyes and ears open for stories.

Another story I came across appeared when I was house hunting in Southampton. Arriving at a house in Shirley, I was warmly welcomed by an unusual student. Nick goes almost all of his life barefoot: in the street, at home and at work. He says it’s liberating, more comfortable than wearing shoes and socks and not hazardous – he tells me he’s only cut his feet once! Before fully digesting this peculiar habit, I was shown the garden which he shares with his next door neighbour. Earlier, when looking round the house, it hadn't bothered me that the house had only a shower, but clearly Nick wasn't happy settling for that. In the garden was a bath, embedded in the grass. The hot water for the outdoor bath was generated through the outdoor stove used to cook full English breakfasts. Incredibly inventive! I decided on another house to live in, but have been in touch with Nick about running this story for ITV Meridian. I’m hoping he’ll say yes.
Posted by Mark Ansell at Monday, March 30, 2009 No comments:

Email ThisBlogThis!Share to TwitterShare to FacebookShare to Pinterest
Labels: stories 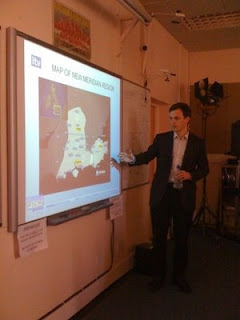 Today I went to Cardiff Journalism School, nine months after finishing the course there. I was invited to speak to the postgrad students about ITV Meridian and to be a 'guest editor’ on a production day (where the students mimic a real newsroom, producing TV and radio news bulletins). I was a little apprehensive about the visit – could I really help the students improve their bulletins? Would they be interested to hear my presentation on Meridian and my tips on how to get on in the industry? And would I be able to instil in them some confidence that there are still opportunities for them in journalism? Thankfully I feel I have.
I really enjoyed giving feedback on the students’ three TV bulletins and giving them advice on how to succeed at freelancing; it showed me that I had actually come quite a long way since the course. It was uplifting to experience their passion for journalism and I’ve left with a renewed enthusiasm for the basics of the art – strong pictures and scripts that are “tight, bright, and right” (as one of my mentors once taught me).
Posted by Mark Ansell at Tuesday, March 17, 2009 No comments: