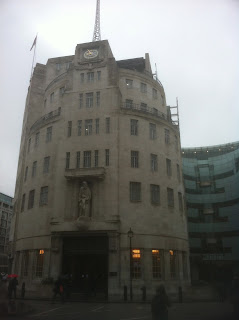 I've spent a couple of months in London making a programme for the BBC Radio 4 series Face The Facts. I'll be blogging about the programme soon (if and when it's broadcast!).

I've thoroughly enjoyed working in Broadcasting House, the BBC's multimedia broadcasting centre right in the heart of London. Last year the new part of the building opened and the sections of the BBC that were in Television Centre, Bush House and elsewhere have now moved in, including the BBC News Channel and the World Service.

The BBC has just started doing tours around Broadcasting House which I can recommend as something to do when you're in London as you can see the news operation at work including the BBC News Channel studio.

I've been making the most of the opportunity of being down in London and watching a few BBC Radio 4 programmes being recorded at the Radio Theatre which is part of Broadcasting House. It's easy to apply for the free tickets and an enjoyable way to spend an evening with a friend in the city. You can apply for tickets on the BBC Tickets website.

And while I'm on the subject of the BBC, there's a new website looking back at the significant events in the BBC's history. There's some wonderful video and audio archive on the website and it's well worth exploring: BBC Where Next?
Posted by Mark Ansell at Friday, April 26, 2013 No comments: