A room filled with older women singing Jerusalem, eating cake and drinking tea then finishing with jam making. Stereotypes are easy to come up with when you're thinking about The Women's Institute. But in Sheffield that assumption is being challenged as something quite surprising is happening. More and more younger women are signing up as members of the WI. The city centre Seven Hills branch, which started in 2009, is now full to capacity with 101 members. Most of them are in their 20s and 30s. So many women are wanting to join that they're now having to turn away new members. It's not surprising then that a new branch is starting in the Crosspool area of Sheffield, on the West of the city.


In order to do a report for BBC Radio Sheffield on this story I managed to go where very few men have been in the past, a WI meeting. The room was full of about seventy women, packed into a church hall, chattering away to each other, drinking tea and chomping on home made cake. This was March's meeting of the Sheffield Seven Hills branch and tonight the activity was tea tasting.

Looking around the hall, it was striking how many younger faces there were packed into the room, the average age of their membership is 33. As part of my report I asked some of the members why they enjoy WI. One woman in her 30s told me "I moved to Sheffield six years ago and I knew nobody apart from my partner. The WI has been a really good opportunity for me to get to know women in the same situation as me." 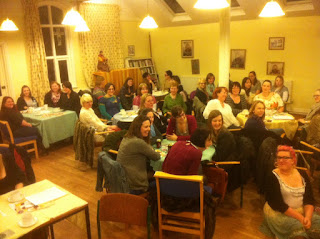 So what attracts women to the WI? "Friendships, activities and tea and cake - what more could I want?" according to another woman.

As it says on the Seven Hills branch WI website: 'forget the stereotypes...this is WI for the 21st century'. The website details some of the activities they've been up to at their meetings including belly dancing and burlesque. Yet they haven't abandoned the essence of the Women's Institute - members have also learnt to make jam and still sing Jerusalem at their AGM!


Undoubtedly the opportunity to make new friends is central to the Seven Hills WI's success but I think there are other factors. Make and do and mend is not only on trend but also necessary in the financial climate with people taking up crafts that have been neglected for a generation. Vintage or shabby chic is definitely in fashion; these designs are visible on every high street and programmes like 'Kirstie's Homemade Home' and 'Handmade Britain' are raising the profile of arts and crafts and the Women's Institute. And ultimately, WI offers women a cheap night out.

If this Sheffield example of how the Women's Institute is working is replicated elsewhere in the country, its future is in safe hands - The WI for a new generation, acknowledging the old but embracing the new.

Here's my report on the meeting...


listen to ‘Women's Institute’ on Audioboo
Posted by Mark Ansell at Saturday, May 12, 2012 No comments: