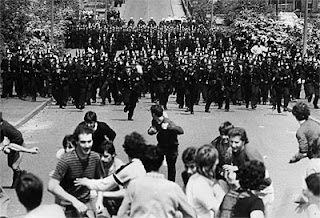 Since the publication of the Hillsborough report in September 2012, attention has turned to the way the police treated miners at the 'Battle of Orgreave'. On the 18th June 1984, ten thousand pickets and five thousand police officers clashed in the most violent confrontation of the miners' strike. My colleague Dan Johnson uncovered evidence that the police were told what to write in their statements following the clashes at the Orgreave coke works. Since Dan's Inside Out programme was broadcast a campaign group has been formed to push for a public inquiry into the police's behaviour at Orgreave.

One of the challenges of covering this story is that the miners who picketed that day are reluctant to speak to the media because they feel the coverage at the time of Orgreave was biased in favour of the police and the government. Nevertheless, we managed to secure an interview with one of the ninety five miners who was arrested and charged at Orgreave. I went to Kevin Horne's home in Mexborough. He was a miner at Barnburgh and was arrested when violence erupted between pickets and the police. After the case against a group of other miners who were charged at Orgreave collapsed, Kevin's case never made it to court. He says people need to know what really happened that day...


listen to ‘Orgreave’ on Audioboo
Posted by Mark Ansell at Saturday, February 09, 2013 1 comment: