I've been at The Alexandra pub in Derby this morning doing a live report from the radio car. The royal wedding will not be shown tomorrow and any talk about it is banned. Here's my tease (a short piece tempting you to stay tuned) and my live... 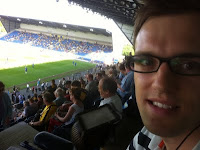 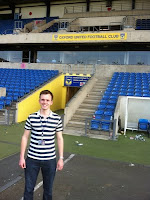 It's been about 4 years since I last reported on football but I really enjoyed it. When I was a student I used to go to a lot of Sheffield United matches at Bramall Lane with my friend Paul and I'd write half and full time reports and read them to my audience - him! Very sad I know but I love the challenge of summing up the action. The aim is to try to capture the essence of the game in an engaging way.
Posted by Mark Ansell at Tuesday, April 26, 2011 No comments:

I've been in Birmingham this week covering my first murder trial. Sylwia Ciapinska was a 24 year old Polish teacher who came to live in Burton to earn money to buy a house in Poland. Just two weeks after she moved to England, she was murdered by her Polish housemate Tomasz Sobczak. 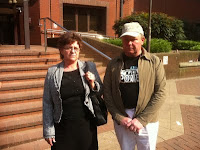 The Crown Court in Birmingham is a long way from the BBC building called The Mailbox, so I decided to use my iPhone to record my report for the news bulletins, interview with the police and statement of the victims parents (left) and then email them back from the phone to the newsroom in Derby. The app, VR+, worked a treat. The sound quality is really impressive and it took just a couple of minutes to email back the 3 bits of audio. I'd recommend it to any radio journalist. Here's my bulletin piece, recorded on the steps of the court, minutes after the guilty verdict... Sylwia Court VP 19 April by markansell 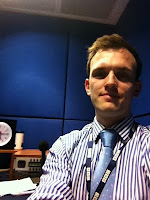 As soon as I'd sent the bulletin report, I hot footed it to The Mailbox to do a live illustrated 2 way, or in non-journalism speak, interview with a presenter, for the BBC Radio Derby drivetime show from one of the studios. I used the audio I recorded on my phone as part of the 2 way...
Sylwia Court Drive 2 way 19 April by markansell
Before and after the days' events in court, I went to Burton to record a backgrounder (a report telling the story of what happened to Sylwia). It was broadcast on the Breakfast Show, the morning after the verdict and sentencing... Sylwia Backgrounder 20 April by markansell
It was a disturbing story to cover but nonetheless fulfilling - there is no more gripping a drama than in court.
Posted by Mark Ansell at Friday, April 22, 2011 1 comment: 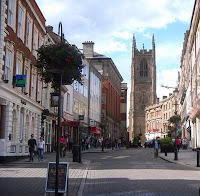 I've been looking into the stats on the number of young people in Derby who are are claiming job seeker's allowance. I found out that over the last 3 years it was up 77% to over 2,000 18 to 24 year olds. I went out in to Derby to ask random young people the daunting question, "why aren't you working?" And this is what they told me for this morning's breakfast show on BBC Radio Derby...
Podcast Powered By Podbean
Everybody I spoke to was frustrated but nonetheless friendly and not in the least bit threatening. It just shows that with a mic in your hand you have the unspoken permission to ask people almost anything and that most people don't mind being asked questions. I remember when I was a teenager on work experience at an Oxford commercial radio station I was asked to go out and vox people on their sexual health, and people answered!
Posted by Mark Ansell at Thursday, April 14, 2011 1 comment:

Birds of Prey in Risley 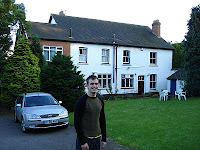 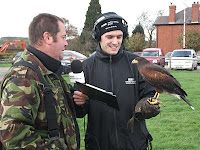 I recently had the great pleasure of going back to Risley, the Derbyshire village where I spent many a happy weekend in my younger years. My Bonnemaman (Belgian Grandma) and Grandad lived in a lovely big, old house (left) with outhouse after outhouse next to garden after garden.
As part of a nature series for the afternoon programme I went to a bird of prey centre in the village. The lives I do in the afternoon last 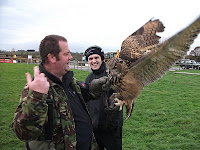 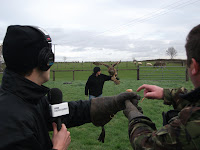 longer than for the breakfast show where we cover many more stories - so I had plenty of time to get my hands on a very dangerous animal...
Podcast Powered By Podbean
Posted by Mark Ansell at Sunday, April 10, 2011 1 comment:

Today I was reporting live at a new 'fish therapy' shop in Burton after stories in the press claiming that it could be dangerous to have fish nibbling on your feet...


Podcast Powered By Podbean
Afterwards, I recorded a video on my phone...
Posted by Mark Ansell at Friday, April 01, 2011 1 comment: