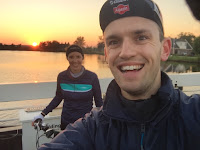 If like me you love cycling,  I'd highly recommend getting yourself and your bike to Holland. There are cycle lanes everywhere and most of them are separated from cars. It's cycling heaven!

I was determined to do a touring holiday around the country and managed to persuade my wife to join me. I have a number of relatives and friends in Holland because I was born in the country so I plotted an ambitious route (pictured below in pink highlighter) to see them and their country. 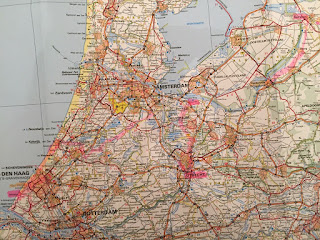 We headed out there in mid-October with our bikes on the ferry from Hull to Rotterdam. Unfortunately it was really cold, much more like winter than autumn and on one day we rode through heavy rain for three hours! Perhaps that's to be expected on a touring holiday. We made the best of it - layering up (see below) and keeping moving.
Before we went on holiday I plotted the journey using an online cycle route planner on the holland-cycling.com website and bought a book with maps of cycle routes. Navigating once out there was relatively straight-forward using the cycling-specific signs which each had a different number. I also used Google maps on my mobile phone which was attached to my bike with a mount. I'm not ashamed to say we also took the train a couple of times when we couldn't face riding because of bad weather or tiredness. By the way there was more space for bikes on the trains in Holland but it's worth knowing that you have to book and pay for an additional ticket for your bike. 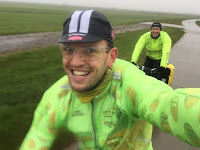 The lowlight was definitely getting lost in the dark in the middle of nowhere after riding 100km in very cold weather. In the end we had to admit defeat and call my friend Sander (who we were staying with next) to come and collect us. It was so cold that I knocked on the door of the only house in the area and asked if we could wait at theirs until our lift arrived. Initially I was told no, but managed to gently persuade the old couple to let us in, that I wasn't part of an elaborate plan to rob them! It was 8pm, pitch black and in the sticks so I couldn't blame them for being cautious. 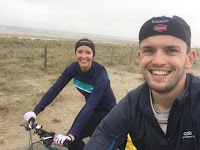 Conversely, highlights were earlier on that day's ride taking a small boat to cross a river just as the sun was setting (see top picture above) and cycling along the sand dunes near The Hague on our last day (pictured right).

Thanks very much to all the friends and relatives who put us up, fed us and encouraged us on our adventure. Tot ziens!

Email ThisBlogThis!Share to TwitterShare to FacebookShare to Pinterest
Labels: Cycling

I've been filming a story about volunteers cleaning-up flood-hit waterways in Yorkshire. The Boxing Day floods left rubbish and other debris along our rivers...

Next time you come to Sheffield I can highly recommend a visit to Kelham Island Museum. I've been down there to do a story on the majestic River Don Steam Engine. It produced armour plate for the warships at the Battle of Jutland, which took place one hundred years ago. Now a lottery grant means it can steam on for generations to come.