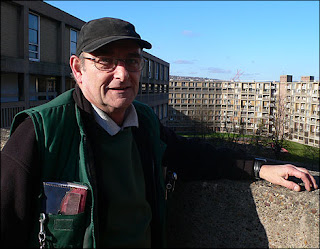 Sometimes while out reporting you meet the most remarkable people. Grenville Squires is not just notable because of his name, for 28 years he was the caretaker of Park Hill, Sheffield's (in)famous council estate that towers over the city. Anyone who's ever taken the train to Sheffield can't have missed the huge buildings of flats at the top of the hill. They were built in 1957 and are Europe's largest listed buildings.

I went to interview Grenville at his home about plans to build a hotel at Park Hill as part of its redevelopment. Incidentally he's in favour of the idea as long as it helped the estate survive into the future, but it was when I was about to walk out of his front door that my ears were really thrilled. He told me a fascinating tale from his time as caretaker there and moments later was repeating it for me to record on my phone. Grenville then went on to tell me another cracking story.

Please be aware that the stories are a bit morbidly disturbing so if you're of a sensitive disposition, you may wish not to click play...