I've been reporting on a story to do with female runners in Yorkshire fearing they've fallen victim to a running event scam. 'She Runs The Night' was advertised as a women's only race in Sheffield on Friday night and in Leeds on Saturday. Runners paid around twenty pounds each but both city councils say although they did receive enquiries, the bookings were never made and the events are not due to take place. Running events elsewhere in the country under the same name, with the same organiser also failed to materialise.

I took a call whilst out and about on Saturday from a very upset farmer who told me 7 sheepdog puppies had been stolen from his farm in the Peak District. On Monday I went and filmed a story with him...

Thankfully there was good news that night. After it was on Look North, five of the puppies were found in a plastic box in a wood a few miles from their home. Two of the puppies are still missing and Derbyshire Police are investigating. The family are convinced that it was thanks to the story being on Look North that the puppies were dumped and ended up being found. It's either that or their Facebook campaign that went viral. It feels good to have been able to help. Here's my story from the next day when I got to meet them : ) They call it puppy love and I've got it!

My story went viral on social media and my three tweets got more than 800 retweets, likes and replies. I think this story shows the positive side of social media...and regional TV news! 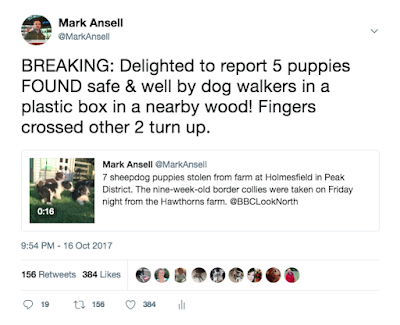 I've been to Barnbrugh in Doncaster to meet residents who are campaigning against plans to built an HS2 high speed rail embankment through their village. I met a couple who have lost out twice because of HS2. But the company in charge of the project says minimising the impact of the railway is at the heart of their designs...

I've been looking at some seriously troubling stats about the health of people in Doncaster. It has the second highest proportion of overweight and obese people in the country and is the least active place in Yorkshire - nearly 1 in 3 people do less than 30 minutes of moderate exercise a week. I went to film at Fit Rovers, which is one of the programmes that authorities are funding to try to get people fit and into shape...