For the second week in a row I reported on the Clap For Carers. Last week there was a musical theme... 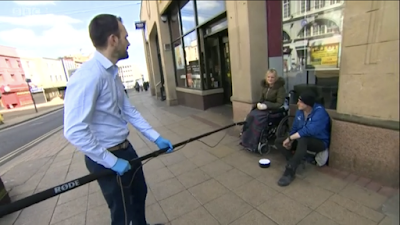 My work life has changed a lot since the start of the coronavirus lockdown. Journalists are key workers so I'm still allowed to go out reporting on stories. To restrict the amount of time we're outside, we're only deployed when our programme producer is sure s/he wants to run the story. I recently reported on the attempts to get homeless people to self-isolate by being housed in hotels, B&Bs and hostels. This photo shows some of the precautions we are taking when out reporting. I wear rubber gloves and use a long mic pole to do interviews to ensure I keep at least 2 metres away from people. 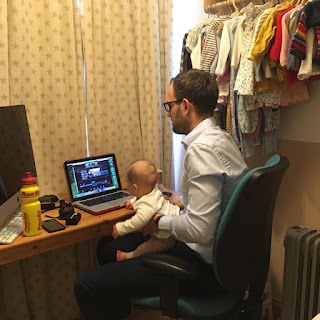 I obviously have to keep my distance from my camera crew too and that includes after filming, when we edit the story. With the homelessness story, my cameraman colleague Malik wanted to try out editing from a distance via our laptop screens. While Malik was editing from his van in the BBC Radio Sheffield car park, I went back to my makeshift office at home and we worked together to edit the report with screen sharing on Zoom. Malik played me the interviews so we could choose the clips which he spliced on the timeline. I recorded my voiceover on my iPhone and emailed him the audio. As you can see I had some help from my little assistant who has agreed that her room is mine by day and hers by night! 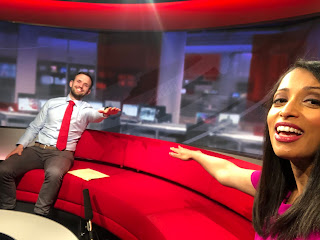 When reporting live on the BBC Look North set in Leeds as I did last week I have to keep at least 2 metres distance from the presenter. To minimise risk we also do not wear personal radio mics - you can probably just about see the microphone we use which is by my knee in the photos. Luxmy and I kept a safe distance from each other! 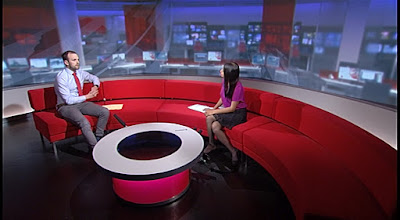 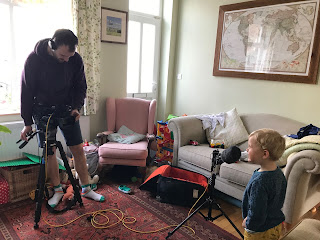 I normally film the majority of my stories myself using a camera, tripod and personal radio mic which I clip on the interviewee's collar. However because I need to keep at least 2 metres distance from everyone, I have been given a mic stand and a long cable so that I can use my gun (fluffy) mic instead of a radio mic. I've been testing this at home with my other slightly bigger assistant!

I'm doing the majority of my work from home which is very different from being around my colleagues who I'd often bounce ideas off and socialise with. When I am in the newsroom at BBC Leeds or Sheffield we keep our distance from colleagues by only using every other desk.

Despite the changes to the way we're operating, the team at Look North is pulling together and working really hard. We're determined to bring our audience the best possible coverage of the biggest story of our lives and I feel privileged to be a part of it.
Posted by Mark Ansell at Monday, April 20, 2020 1 comment:

I covered the very sad story of two members of hospital staff dying from Covid 19 in Yorkshire. In my live report I felt an even greater sense of responsibility than I normally do a good job of telling the story e.g. getting the names of the nurse and technician right as well as the words of tribute to them.

I covered the weekly 'Clap for Carers' story where people step out onto their front doors to pay tribute to NHS staff and other key workers dealing with the coronavirus pandemic. I was inundated with footage filmed by colleagues and viewers from right across Yorkshire so had the luxury of choosing only the very best material. The clap was at 8pm and we were on air with this story in our late bulletin at 10:30pm so it was a tight turnaround in the edit. We used lots of natural sound of the clapping and cheering to help tell the story.

This week I did my first report on the coronavirus.  The government has given councils funding to find places for rough sleepers to live. Some homeless people have told me they'd rather stay on the streets than go into emergency accommodation - as they think they are safer there. I was given exclusive access to the team coordinating the homelessness response to the pandemic in Sheffield.