Email ThisBlogThis!Share to TwitterShare to FacebookShare to Pinterest
Labels: football

I've been in Wakefield to meet double Paralympic gold medallist Danielle Brown who's launched a project that helps disabled children compete alongside their able-bodied classmates. Danielle - who's an Archer from Lothersdale near Skipton - became the first disabled person to represent England in an able-bodied event at the Commonwealth Games. She's now backing the 4 All Games.

Here's the report I put together on the story:


And this is the lunch bulletin as live:

I've been down to Chesterfield to meet their new manager Gary Caldwell. The former Wigan boss has the challenge of keeping the Spireites in League One.

Filming, editing and scripting this story in a few hours was a challenge as there's a lot to think about - who are you going to interview? What shots do you need to make a good package? How can I make this of interest to people who aren't into football? Fortunately I could film with the fans who'd been invited down to the press conference so I focused the story around them... 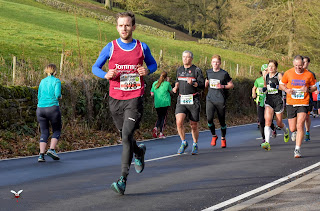 I've been offered the daunting but exciting opportunity of running the London Marathon for Tommy’s, a charity which I feel passionately deserves support.

Over the last two and a half years of trying for a baby, my wife and I have had two miscarriages. The pain and upset this has caused is hard to put into words. So many couples suffer a miscarriage - around 1 in 4 women lose a baby during pregnancy and birth.

And this is where Tommy’s comes in. They fund research into pregnancy problems and try to end the stigma around miscarriage. Tommy’s and its supporters refuse to accept that a baby's death is just 'one of those things'. Their target is to halve the number of babies that die during pregnancy or birth by 2030. There’s loads more about the charity here: www.tommys.org

My wife and I are determined to do something positive to help. We raised more than £3,500 after both doing Ride London in July 2016.

I've since been given the chance to do the London Marathon in April 2017 for Tommy’s and I simply could not turn it down. It'll be the first marathon I've ever done and to say I'm nervous about it is an understatement! I want to continue where we left off and aim to raise a total of £5,000 for both Ride London and the London Marathon.

Thanks for your support.

I've been to film a story with a really inspiring young Muslim man. Dr Mohammad Mozaffree is a dentist from Leeds has been giving up his time and money to volunteer in war-torn Iraq in what he describes as the worst health conditions he's ever seen. He treats hundreds of patients, including orphans and widows of victims of the so-called Islamic State, through the charity A World Without Barriers...