When it was announced that women's boxing would be included at the London 2012 Olympics, we localised the story by filming with a boxer from Rotherham. It was a challenging story to edit because the subject of the story (Sharon, boxing) was always moving.
Posted by Mark Ansell at Wednesday, October 28, 2009 No comments:

On my first week at Calendar I was sent out on this story. I wasn't expected to be out reporting so soon but was really up for showing I could do it. I knew a bit about Sheffield Arena having been there to watch Queen with Paul Rogers a few years ago. First of all I turned up at a Leeds Council executive meeting to see if they were going to give the arena plans the thumbs up. It could have used up a lot of the precious time I needed to work on the package but thankfully they were helpful and let us film in there and even discussed the Leeds Arena plans earlier than planned on the agenda so that I and the cameraman could get away and film on the proposed arena site. I got back to the newsroom at about half four and with the help of a craft editor, finished the package in time for Calendar at 6pm. Thankfully I'd spent the time in the car with the cameraman writing a script so when I got back to the newsroom I was able to turn the package round quite quickly. Since my report was broadcast, the Government has refused to allow Yorkshire Forward to invest the £18 million of public money in the project so the arena may well now not be built.
Posted by Mark Ansell at Wednesday, October 21, 2009 No comments: 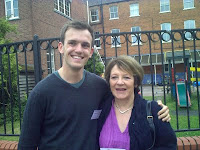 I recently went to Brightlights, a Catholic youth festival in north London, and met some incredible people...

One of the highlights was hearing Delia Smith talk about her faith and then spending some time one-on-one with her discussing Catholicism, football and modern life. She was very open, interested and friendly. 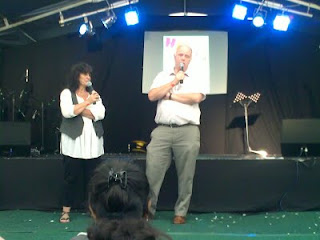 The most inspiring speakers of the weekend were Barry and Margaret Mizen. Their 16 year old son Jimmy was murdered in May 2008. Somehow they've been able to forgive his killer. After their talk about Jimmy, I asked them for an interview for this blog which I recorded on my mobile. (Although the sound quality isn't great - I wish I'd chosen an iPhone - it shows you that you can interview or capture audio anywhere.) I was so happy to meet Barry and Margaret; their message of forgiveness and hope was inspirational.
CLICK HERE, THEN CLICK ON 'MIZENS', THEN 'OK' TO LISTEN TO THE INTERVIEW 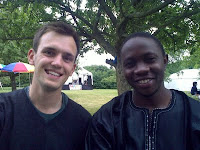 Another speaker at Brightlights that really impressed me was Kepha, a young leader from Kenya. He lives in Kibera, one of Africa's biggest slums. Kepha set up Kibera Community Youth Programme with a group of friends to help other young people from the slum succeed in life. After the violence which followed Kenya's 2007 elections, their peace project brought young people together for healing and reconciliation. I wanted to find out why he feels so passionately about young people being key to tackling poverty and hardship and ask him his thoughts on our culture.

CLICK HERE, THEN ON 'KEPHA', THEN 'OK' TO LISTEN TO THE INTERVIEW
As well as recording both interviews on my phone, I also took all of these photo with my Nokia E71.
Posted by Mark Ansell at Thursday, October 15, 2009 2 comments:

Email ThisBlogThis!Share to TwitterShare to FacebookShare to Pinterest
Labels: Catholicism

The Challenge of the Channel


Liane Llewellyn has to be one of the most incredible athletes I've come across. The Yorkshire physiotherapist swam non-stop across the channel and back in twenty seven and a half hours. We had a cameraman in Dover to film with her before she left and on her return. His footage was sent to me in Leeds via the ITV Meridian newsroom in Maidstone where I used to work. I then edited the package together. I'm particularly fond of the shots of her walking on all fours, like an insect, to become the first woman from Yorkshire to do the double crossing.
Posted by Mark Ansell at Sunday, October 11, 2009 2 comments:

Email ThisBlogThis!Share to TwitterShare to FacebookShare to Pinterest
Labels: Calendar 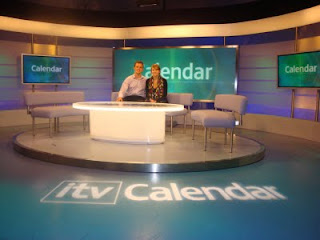 Hannah Whelan, an A Level student and sister of my good friend James, shadowed me for a day at ITV in Leeds. I asked her to write a blog about the day. Hopefully it'll give you an insight into what it's like to work on the Calendar programme. Over to Hannah...
"I'm a seventeen year old 6th form student desperate to get into the media industry. After doing work experience at an advertising agency, where my week was packed full of activities, I thought I’d be more than prepared for the ITV Calendar newsroom. But after the first five minutes of the morning news meeting, I realised I was at the start of a very hectic day. 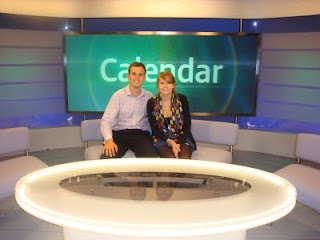 After the morning meeting, Mark introduced me to the important people and equally important equipment in the newsroom - from the graphics team and technical operators, to the weather presenter and programme editor. I then got sent out with a reporter, Kate, and cameraman, Richard. Kate was doing a story on an Asian music event that was about to be held in The Wardrobe in Leeds. I found watching the reporter and camerman at work quite surreal. It was eye opening being behind the camera instead of watching the finished product on TV.

When I returned to the newsroom I was whisked into the gallery to observe the lunchtime news. Scripts were quickly reprinted for the presenters after one or two changes were made by the producer and the PA, who times the bulletin, announced that the programme script predicted duration was six seconds under, which the team saw as a challenge. Being backstage during the programme, I discovered the intense work load put into just one news bulletin. At the end of the bulletin, the weather started and high-fives were exchanged. As soon as the weather finished and the bulletin was off air, the Calendar team were back to work, this time on the main programme at 6pm.
Over lunch, Mark got his teeth stuck into editing and voicing a report for the main programme which had to be finished on a strict time schedule. I called some university press officers to try and find an academic who would speak on an upcoming crime story and saw Mark finish an impressively quick edit of his report.
Everything made it in on time for the six o’clock programme. I found it interesting to notice the difference between a pre-recorded 'as live’ and a genuine live report - sometimes the viewers wouldn't know that an item was pre-recorded. The debrief was a fairly uplifting sum up of the programme as well as a discussion on plans for the tomorrow's stories.
The intensity and buzz of the newsroom was far more intense than I had expected. Everyone is busy working on something for the next bulletin or the main programme. I had an amazing day, seeing how the whole operation worked - from going out with a reporter and cameraman, seeing mark edit a package, watching the gallery team put out a programme and everything else in-between. An enormous thank you to Mark and the team for my exhilarating day."
Posted by Mark Ansell at Monday, October 05, 2009 No comments: