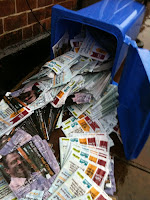 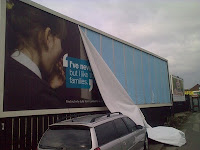 
And finally, in the build up to polling day I put together lots of research on all the (74) constituencies in ITV Calendar's patch. This included finding out the names and contact details of the candidates. When I called the press team at the Labour Party they tried to sell me the info! Why do we want to pay to publicise their candidates? You won't be surprised to know they gave in without payment.
Posted by Mark Ansell at Thursday, May 27, 2010 1 comment:

On polling day I put together a report on the elections. Broadcasters are very limited on what we can cover on the day of the election by the OFCOM Broadcasting Code section 6 which says 'discussion and analysis of election issues must finish when the poll opens'. So I included the leaders voting, unusual polling stations and the postponed vote in the Thirsk and Malton constituency.

I then had a kip and was back in the newsroom in time to see the first results coming in. The big story was kicking off just a few miles from where I live in Sheffield - hundreds of people, including many students, had been unable to vote in the St John's polling station in Ranmoor. Thanks to Twitter, I was able to find some of the students who'd been there including Holly Taylor, this year's Sheffield University Students Union Education Officer (who was a first year student involved in education campaigns when I was the Education Officer three years ago). She uploaded the footage she'd filmed on her camera to YouTube for me and I then passed it to ITN who broadcast it on their live election show - a good example of citizen journalism I think you'll agree. Holly then distributed it far and wide and it was broadcast around the world on the BBC and CNN among other news organisations. A group of students who are angry with the way they were treated at the polling station set up a Facebook group which now has 5,500 members. Here's the video which has been viewed by more than 12,000 people on YouTube...

We had cameras covering 32 of the constituency counts in Yorkshire and Lincolnshire, including at Ponds Forge in Sheffield where six counts took place. It included the fiercely contested Sheffield Central seat which Labour held - Paul Blomfield won by just 165 votes from the Lib Dems. For each of the counts our camera operators filmed the declaration and an interview with the winner. Here's the constituency I live in, Sheffield Central, as an example.

How did you follow the general election? The political parties invested a huge amount of effort into trying to reach their supporters and undecided voters through social media websites such as Facebook, Twitter and YouTube. Before polling day, I investigated whether this is the first internet election...


The report includes an interview with Richard Allan from Facebook and Dr Peter Woodcock from Huddersfield University.

This video is also on the ITV Yorkshire website.